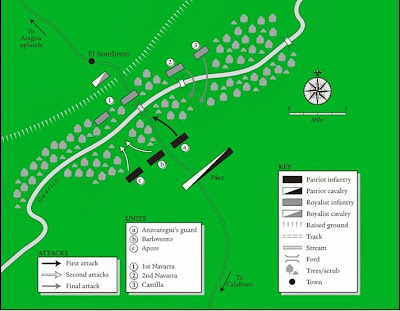 The battle of Sombrero (1818), was a mostly infantry affair, where the better trained Spanish regulars outfought and outmanoeuvred the Patriot Army of Simon Bolivar. There is an excellent account of the battle written in the book "Conquer or Die" by Ben Hughes. The only problem is that they have the wrong map in the book (on page 87).

A replacement for the map was posted up on Flickr a while back, so I thought I would share it with you here. The beauty of this battle is that it presents a perfect scenario for a small scale, infantry only battle. Contesting a river crossing (Charles Grant could even have written it if it was not an actual historical event), Bolivar attempted to take the field by head on attack across the Guarico River. The Spanish were waiting in ordered ranks on a slight rise on the other side. Unsurprisingly they wreaked havoc on the Patriot army, and cut them down crossing the river with their musketry.  After several failed assaults across the river, the coup-de-grace for the exhausted Patriot army came from a Spanish flank attack, which shattered the Patriot attack, and caused the army to fall back, some units routing. Full destruction was only avoided by the Spanish lacking sufficient cavalry to follow-up, the Patriot Llaneros cavalry covering the retreating troops.

As I said, this makes for a perfect wargame scenario. The Spanish had 3 battalions of 800 men each, and 2 companies of the Castilla battalion (roughly 200 men). Using my preferred rules (General de Brigade), with a 1:20 figure ratio, this would give you 3 battalions with 40 figures each and 10 flank company figures for the Castilla battalion. The small Spanish cavalry detachment played no role in the battle, so can be left out.

Similarly for the Patriot army, the 3 battalions of Bravos de Apure, Barlovento, and Anzoategui's Honour Guard can be represented for a game by the same numbers of men and 1:20 ratio, so 40 figures for each Battalion. The Llaneros cavalry also did not participate, so do not need to be included.


The Spanish army size could be reduced slightly to make the game more interesting, though they should be ranked as 2nd line in quality, except the 2nd Navarra Battalion which can be ranked as regular line infantry. The Patriot army can be ranked as Conscript, except Anzoategui's Honour Guard which contained several veterans from the British Legion so should be ranked as 2nd Line. All the Patriot battalions will also have the "Enthusiastic" unit modifier of +1 on morale rolls (this reflects their greater commitment to the cause and to fighting). 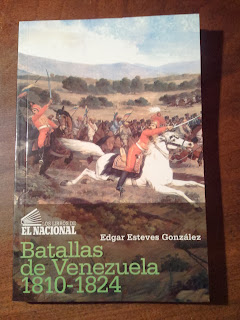 I've managed to glean a lot of new information about this and other battles, thanks to a kind contact in Venezuela who recently sent me a copy of the above book published in Caracas. This lists details of all the battles in Venezuela from 1810-1824, and is written by Edgar Esteves Gonzalez. It's in Spanish, so if you get your hands on a copy, a dictionary should be enough to get you through the battles. I will certainly post up more scenario ideas in the near future as I plough through it.

Once our new Spanish figures are released in the next week or so, we will have available all the figures necessary to re-fight this battle :-) (a shameless plug I know...)


The figures can be purchased directly from our webstore here:
http://www.orinoco-miniatures.com/
Posted by The Wilde Goose at 19:18