Flags and other images 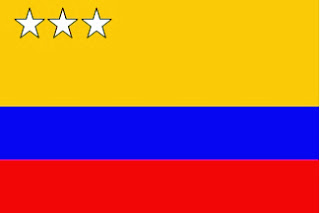 As we roll out the unit packs for the South American Wars of independence, these figures will also need flags and banners to go with them. Until such time as all the most common flags are available for sale, I am putting up some of the most common flags here for you top print and use. First up is the Gran Colombia flag used by numerous battalions. This I created myself and as such is my copyright, but can be used for non-commercial purposes. These flags would often have sewn across unit mottos, emblems and identification (which will be included in the flags that are now in pre-production. An example of which you can see below (a cavalry standard for the Hussars Del centro). 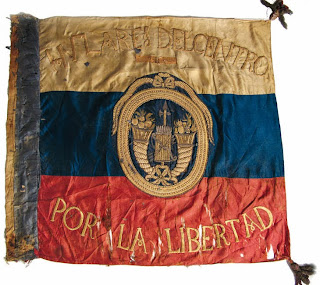 The flags with the three stars at the top iis derived from a period print which you can see below, which was used by the Marin Infantry in 1823. Other flags that one could use for the Patriot armies would be variations on the theme of "Liberty or detah", and " The War to the Death". More flags will follow, especially for Spanish Infantry.

As we are still in the process of having flags designed for the new Gran Colombian figures, I thought I would post up three flags that I put together which can be used in the meantime. These are perhaps not the same excellent quality as Flags of War, but they should help those eager to get some of their new command sets finished. The first flag is intended to represent the Gran Colombian flag from 1821, the one most probably used during Bolivar's final campaigns in Venezuela.

The next, is the "War to the Death" flag used from around 1814 up to the end of 1819. As suggested the flag indicated that no prisoners would be taken in battle in what was the most brutal phase of the Wars of Independence.

The last flag is the Gran Colombian flag from 1819, and thus most useful for battles during Bolivar's campaign in New Granada in 1819, ending in the battle of Boyaca

The best way to produce the flags is to copy and then paste them into a word or other document, and then resize and print for use with your 28mm figures. I hope you like them.